What’s funny about this race for me is that the inaugural year was 2006 and had the real estate market not been so incredibly crappy, I might have been able to say I ran every year of its existence.  I remember seeing it advertised in ‘06 and thinking “maybe if we can sell this house in Lake Elsinore and move to Oceanside, I can run it” – turns out it took forever to sell that house (8 months) and we didn’t move until ‘07. So it’s 5 years running for me instead of 6. And every year this race rocks (even when I didn’t run “fast”).

We got there a little later than I wanted – 6:30am. We live maybe 5 or 6 miles from the start so it’s easy to push your luck with timing. And I picked up my bib and chip after work yesterday, so, even more reason to dilly-dally. As always, parking was a cinch. Husband started snapping pics as we walked to the start. 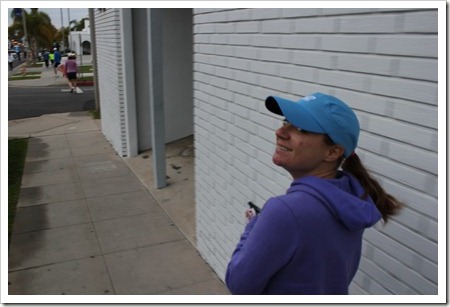 The 5 mile race is the earliest and super-low-key. No lines for porta potties. Plenty of space in corrals (they even have corrals by time! Awesome!).

I was fittering in place just behind the first corral an I found Nicole in front of me! She told me to stop being stupid (in so many words) and get into the front corral with her since the corral I was in was 8-min mile. I always feel weird about getting up front in a decent-sized race. She was going to go out 7:10-ish and that scared the crap out of me, so I let her take off and kick some hiney (and she totally does run on her toes – I am always in awe of forefoot strikers being the heel-striker that I am). We took a minute or two ahead of schedule 6:58am). 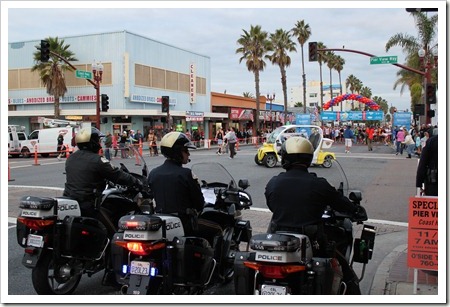 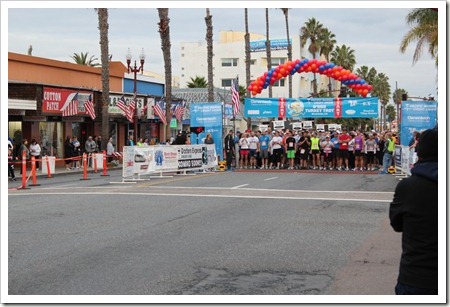 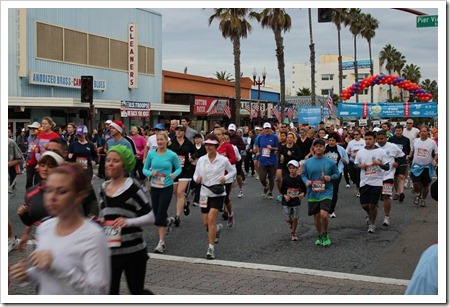 I saw Nicole pass me again at this point – apparently she had a shoe-untie issue! Too funny. It was so early in the race we were both still able to talk without sounding like we were dying. I managed to keep her in sight most of the race – which was good motivation. I figured she should finish 60-90 second ahead of me so if I could keep her in view most of the race, I’d hit my goal of sub 38.

I felt good most of the race – I think I probably could have pushed a bit harder but I was concerned I would fade (in high school XC & track, I was the queen of going out too fast and fading almost always).

There is one hill at mile 3.5-ish  that is a pain in the butt – it’s short so it’s over quickly but it’s steep so you feel a bit miserable for about 40 seconds. This was the one split I had that was over 7:30. The others were under. I had told myself that if I could get the last mile well under 7:30 with the others at 7:30 I’d be happy.

The last .7-8 or so are along the strand, like 10 feet from the waves. So close that this time I totally got splashed by a big one! I guess it was high tide! Kind of threw me off a bit, was not expecting to get hit by the surf on the final stretch. 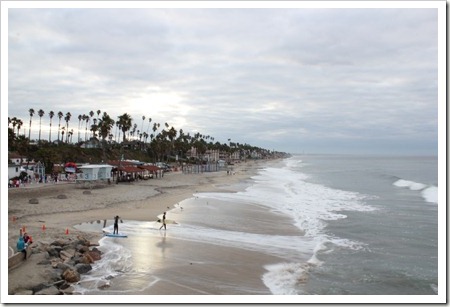 Garmin beeped at mile 5 - 36:41. I was both stoked and annoyed at the same time. I could see that I was not going to make it to the finish line to break 37 but I was sooo close! But then I was happy that I was totally going to kill my last PR of 38:51 and my goal of sub 38.

Look at this awesome pictures my husband got just after I crossed the mat. I have to keep up my bad-picture-taking streak: 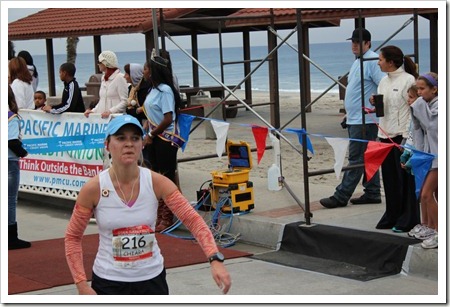 Those are my home-made ghetto arm warmers – two pairs of Target knee high socks sewn together.

This pace is only 1 second slower than the 5K two weeks ago! The course was certainly easier, but I do think I had some room for improvement on the 5K. Sub 22 might totally be possible!

Afterwards we chatted a bit with Nicole (who unofficially broke 36 minutes!) and her family and then went back down to the finish to wait for my buddy Tony to finish. In years past he has kicked my ass in the 5K, but he hasn’t been running as much lately (and I have been running a butt-ton). Funny how much consistent practice can make all the difference!

Overall, it was a great race. I had The Husband back (he was training in Denver for two weeks and finally got back Friday), got to hang out briefly with some friends, ran a great community race, and had a 1:40 PR in the 5 mile!

Now it’s time for some Turkey!