Living in a Hair Dryer

Last week, I felt grossly behind schedule on blog reading as I was at JavaOne in San Francisco gettin' some lernin'. Massive conference of techie programmers. Mostly dudes so I stuck out, per usual. It was like constant eyeballs darting to any of the females. I was able to run on the hotel treadmills so I didn't fall off that wage. The weather was pleasantly in the 60s and I came back to oppressive heat this weekend.
Which rolled into today.
At 9:30am it was 100 degrees. It is hotter in San Diego than in Palm Springs, Las Vegas, and Phoenix. Ridiculously hot. Mind-boggling-ly hot. Now, I've lived in the Inland Empire (20+ miles inland in a valley) where it was regularly 105 in the summer, but it blows my mind that we're 2 miles from the ocean and it's 104. Only 10-15 miles inland, not in a valley, it's 115. At lunch I saw a crazy chick running on the street. Running at high noon and 104 degrees. Masochist. I don't have enough self-loathing to run in this kind of heat outside.
Speaking of running, I have less than a week until the Camarillo Half. I decided, on Friday, to run a 5k this past weekend and see if I have improved my time. Not unexpectedly, I managed to find another race with issues. They had plenty of portas and even hand washing stations. But the course was a quarter mile short. That is just egregious. 2.86 miles rather than 3.1. I am still peeved. I would have had a post-high-school PR and, in fact, only have been 10 seconds or so off my high school 5K time. Had I kept running through to 3.1 at 7:45 which I could have easily done for another 400 meters, I would have been between 23:40 and 23:45. Pffft. My average pace was 7:36. About 30 seconds per mile faster than the last 5K. So, I'm happy about that, but still annoyed about plunking down $30 to not even have the race be within .1 miles of the expected length. FAIL.
I have also been feverishly working on a new avenue to achieving acute carpal tunnel syndrome. Crochet. I finished a cowl neck thingy which is really cute. When the weather tempers I will take a pic and show you. Right now, I wouldn't put it on if you paid me in high quality cashmere yarn, it's so damn hot. I, also, took apart my granny afghan because I was seriously delusional and ignoring reality. I spread the whole thing out on the bed and it was like 12+ feet long. I am not exaggerating. Even if I flipped it around, that is just massive. It was taking me one hour or more to complete a row. Now I've got it around 6 feet wide and one row takes maybe 20 minutes. In it's current state: 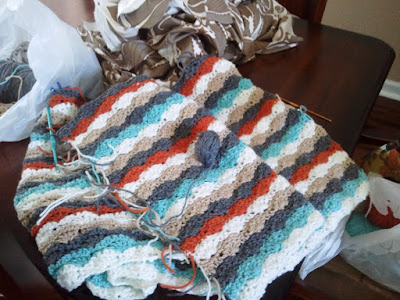 My sewing machine is currently in the shop so the chair is on hold as the next parts require sewing. The damn thing just stopped working properly - apparently the timing was off because it wouldn't sew more than 3-5 stitches at a time before getting stuck. I broke several needles so I cried "Uncle" and took it in. $98.50 to tune it up - hopefully it comes back sceaming a nasty stitch. I had to think about it because at that cost I can buy a cheap new Singer or Brother. I reasoned that fixing up my Necchi, a $500 machine, would be a better investment than getting a cheapo machine. If it craps out in a year I may be whistling (bitching) a different tune.
Labels: california craftiges kvetch-ing running