It's a Bit Drafty In the Bathroom

I decided that we needed to make progress on the downstairs bath this weekend and that progress meant ripping out the drywalled flourescent light box. 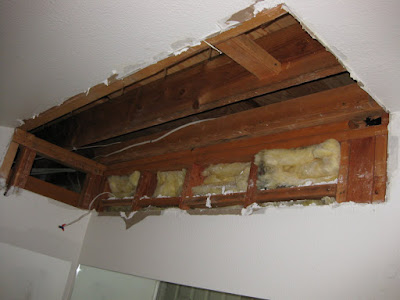 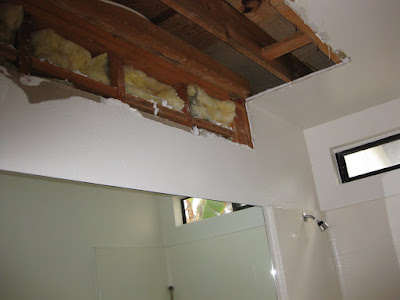 It's a little weird using "the facilities" in such a state as this...
/* start tangent */
All yesterday, when I in there I kept having paranoia that some critter will fall on my head as I sat on the john. I must have mouse-trapping-post-traumatic-stress syndrome from the kitchen gutting when we had "the invasion". I haven't seen any since but I still have a mini freak-out seeing as I'm somewhat tethered to the toilet if one decided to visit me in the bathroom.
/* end tangent */
...but it had to get done one way or another. I am hoping to put it all back together over the next couple weeks. This week, I am hoping HZ (the huz) will be able to do some drywall work on it (I generally get the task of drywall finishing). I have to get a blue electrical work box to install in the wall in order to mount a new, normal, non-80's vanity light fixture. Also have to make a small hole in the center of the stud to route the wire to the other side of the stud so that the fixture will be centered above the vanity.
Now, if I said that progress on the chair is moving slower than the economic recovery, it just might still be an understatement. 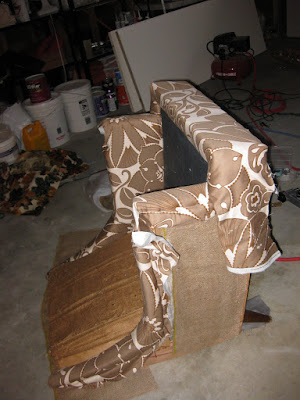 [current state, flipped on its back]
The part I thought was going to be easy actually took me a couple hours to wrap my brain around because I didn't have the template for it. I had cut up my template by not taking apart a wooden piece that was nailed down. I figured I should let nailed parts stay but then figured that taking them off and running the fabric underneath like the original construction would be the best bet. Here is the part I am referring to: 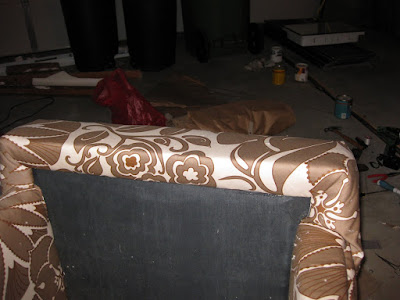 So, it's coming along, certainly, but slooooowly. I haven't even gotten to the cushions and back cushion which are probably doing to drive me to the brink of DIY insanity. This week's goal is to figure out how to use the curve-ease thingies.
Labels: home improvement