The Tile has been Pickety Picked.

I have to say, it's so much easier to blog on a daily basis (if one has the time). This once or twice a week deal is hard. My brain is working overtime trying to remember what the heck went on this past week.

There is much good news, really. First, I still have a job and it's still going well. Good stuff. Second, the Husband's problem with the TPS (throttle position sensor) is covered under warranty - Nissan extended it through to 150K miles (guess it was previously, only until 100K). This is like a $500 savings. Gives me a warm-fuzzy about Nissan - that they recognized the TPS was crapping out in some of its cars and is footing the replacement bill. Third, I picked tile for the first floor. We went to like fifteen million different places (4 places) last weekend and found that the first place we walked into had the best selection so we went back there this weekend. I ended up picking a porcelain tile that looks similar to saltillo. It's probably twice as much as saltillo but installation will be easier and it's 18" x 18", as opposed to 12" x 12". It's $3.60 per square foot which isn't bad, but I would have liked to stay closer to $2. The husband took up the last of the tile yesterday, but the new stuff is currently on a big-ass ship sailing from Italy, so we won't have them in until the middle of April. Here is said tile: 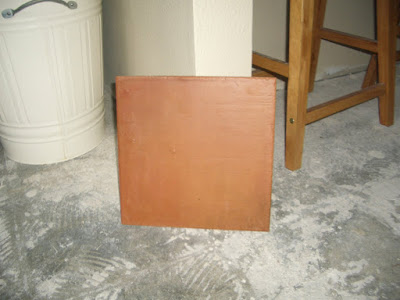 I had a very hard time picking between this color, which is called "cotto" (cooked, in Italian), and another one called "rosso" (red). This one is a little darker. Now it's a matter of picking the wood. I got a 12 months no interest financing thingy from Home Depot so I may take them up on that offer (though, seriously, how much interest am I really losing by paying it all up front when my money market rate is down to 1.6%).

And what's the deal with this ceramic tile that looks like wood flooring? When I first heard about it, I thought: "Ew", but I've seen it now in several tile places, installed on their floor, and it actually looks pretty cool. But I'm kinda thinking it's a fad... Alright, folks, gotta go shower and head to the old jobaroo.
Labels: cars home improvement