I'll start with the TLDR;

But probably you want detail than that... if not, feel free to stop here :)

It's been a year mostly dominated by trail running, though somewhere in there I ran a road 10K, a 5 mile, and 3 marathons.

Up to Boston I had a pretty satisfying year of racing, and then I got cocky with recovery and decided it was smart to run back to back 20 milers (Saturday up the PCT, Sunday down) 6 days after Boston for an 80 mile week. Smart right? Not so much. Part of it may have been the 2 months of minocycline I was on for acne treatment, but probably in equal amounts was my flippancy about recovery. PCT 50 was mediocre (despite coming in 3rd, my finish time was worse than I expected), Black Mountain 50K was equally womp-womp (mostly because I mentally checked out at mile 20 - the lesson learned was that just because you win a free entry doesn't mean you should train and run it. Especially if it was on your list of "Never Do This One Because It Looks Miserable").

I spent the summer traveling and trail running, rebuilding my base. I was in fighting shape by Cuyamaca 100K. Then Loop-2-Gate happened and I decided to DNF and shift my focus to CIM rather than end up with two shitty outcomes.

I was pretty concerned that I was on a streak of shit-tastic races and CIM would be no different.

NYCM rolled around and it was always planned as a training day vs. a racing day, but the weather was so perfect I wondered if I was choosing the wrong A race. But I mostly stuck with the plan to run easy, kept my HR at or under 150 until the end when I decided it would be fun to sneak under my BQ standard for 3:38. I had some piriformis pain starting around mile 13 so probably the choice was right to keep is easy, but the energy at NYCM was so awesome I definitely wanted to run faster!

My training post Cuyamaca leading up was about a 50/50 split of road and trail. I made sure to do some kind of road speed work almost every week (except the week following a hard long run where I ran 20 with 8 MP). I ran the Oceanside Turkey Trot 5 miler as a gage for where I should expect my marathon to land... I went out a bit too fast but managed 34:31 and 4th overall (missed 3rd by 11 seconds - also because they do chip time for top 3 so I didn't realize the girl I edged out at the line had actually started 11 seconds after me). Per McMillan's prediction calculator, this suggested 3:22:50. I was a little disappointed by this number. Other calculators were around 3:20 - in the past I've been both faster and slower than McMillan. I was feeling like there was a possibility I wouldn't PR or I would PR by only a little.

4am alarm, bagel, black coffee, bus + banana -- in that order. We got to the start uneventfully (thankfully, my bus did not get lost like last year). 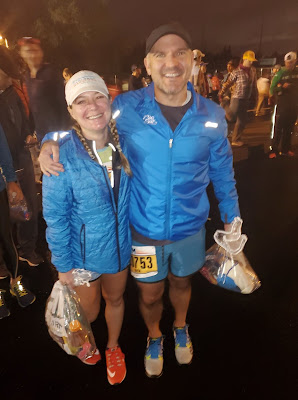 Made two porta-john stops, checked our gear, last minute pitstops behind a bush (literally in front of parked police cars! Public indecency!), and then lined up with the 3:25 pace group about 10 minutes before the start. The gun went off and we slowly crawled to the start line; I tried staying with the 3:25 group but it actually felt like they were going too fast. After about a half mile of weaving around and trying to stick to them, I sort of gave up. And then somewhere in mile 2, I ended up ahead of the group and never saw them again.

I will say right off the bat the pace I was holding felt fast. But I would check my heart rate and it was generally hovering in the high 150s to low 160s the first quarter. So I went with it. But I was definitely concerned. I went through the first 10K at 7:37 pace.

I hit the half at 1:40:07 (7:39 pace) which was both frightening and encouraging. A fleeting thought popped into my head that if I could run a slightly negative split, I would be sub 3:20. But then a moment later, the next thought was: "1:40 flat half marathon in a marathon is already bananas... then doing it again and faster? Seriously?"

So I resolved to just hold the same pace for a while and see how I felt at 20 miles. Then in mile 15 the course turned into the wind (as opposed to a crosswind that we had) and it had gotten stronger since the start. I couldn't remember how long we were going to be on this stretch of road as I knew we would eventually turn again but felt that if this was how the rest of the race was going to go, I was definitely going to have to slow down. I drafted quite a bit as 90% of the field around me was significantly taller! Boy, did this help. We turned at the end of mile 16 and the pace went back to feeling more sustainable.

From 17 to 20 I managed to stay under 7:40, but into mile 21 I started to feel like I was just hanging on... that I would not have extra turbo boost at the end. Mile 22 has that asshole bridge which is hardly a hill at all but somehow is a world of hurt. Those two miles were 7:41 and I had to tell myself that at a minimum I needed to keep the rest of the miles no slower than that.

The last four miles are basically flat. You lose about 30 feet over 4.2 miles, with some tiny rollers in there. I stopped thinking much at that point. I feel like when my heart rate goes over 175 consistently, thoughts just don't stick. They float in and out, mostly unacknowledged. Mile 23 and 24 were 7:39 and 7:35.

At this point I was passing people consistently, and some I was just slowly gaining on. I caught up with a little runner (basically my height) and we ended up alternately pulling each other along for 2 miles. Miles 25 and 26 were 7:35 and 7:31. In the last .2 I saw the sign that said 200 meters left and looked down at my watch: 3:19:19. So... 40 seconds to run 200 meters. Considering I haven't run that fast since high school (that would be sub 5:30 mile pace) and have only seen 42 seconds at the fastest for a 200 in the last 4 years of speedwork, I knew it was not going to happen. But I still pushed because then I was concerned I would end up in 3:21:xx instead. I ended up with 7:14 pace for the .2 (which was faster than last year, so I can't complain too much about lack of effort). 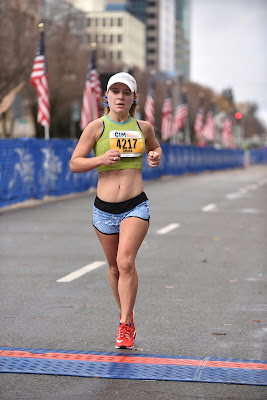 I turned around, high-fived and hugged my 5-foot buddy who finished a few seconds behind me.

At some point CIM will stop delivering me marathon PRs. But as it stands, it's 4 for 4.

Nothing went really badly for me in this race, but I suppose I would have paid more attention to the potential for rain and brought tight fitting shorts as we did get some rain mid-race. And I did end up with a bit more chaffing than normal. I tried in futility to find something on Saturday at 4pm after we got completely drenched during a 2 mile shakeout. Fleet Feet had nothing except some really long Nike ones, and the expo was a 25 minute drive and would be closed by the time we got there. The expo being at Sleep Train instead of the convention center was definitely less than ideal for everyone, including the vendors.

After 3 test run marathons using hydration stations and not carrying a bottle (Boston 2018 and 2019, NYCM 2019), I think this is working for me. It got a little hard to drink in the last 6 miles when my breathing was faster and heart rate higher. But overall it was better than hauling around a 20 ounce bottle. As long as the race as wax paper cups that I can pinch for a funnel, then I'm good to go.

San Diego 50 on January 18th! Actually immediately next is the Santa Run 5K in Pacific Beach but it's more about debauchery than actually running.

And I decided to register for CIM again for the $99 re-run special :) 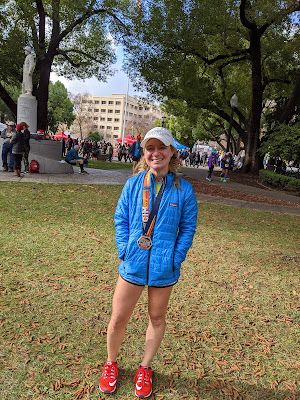