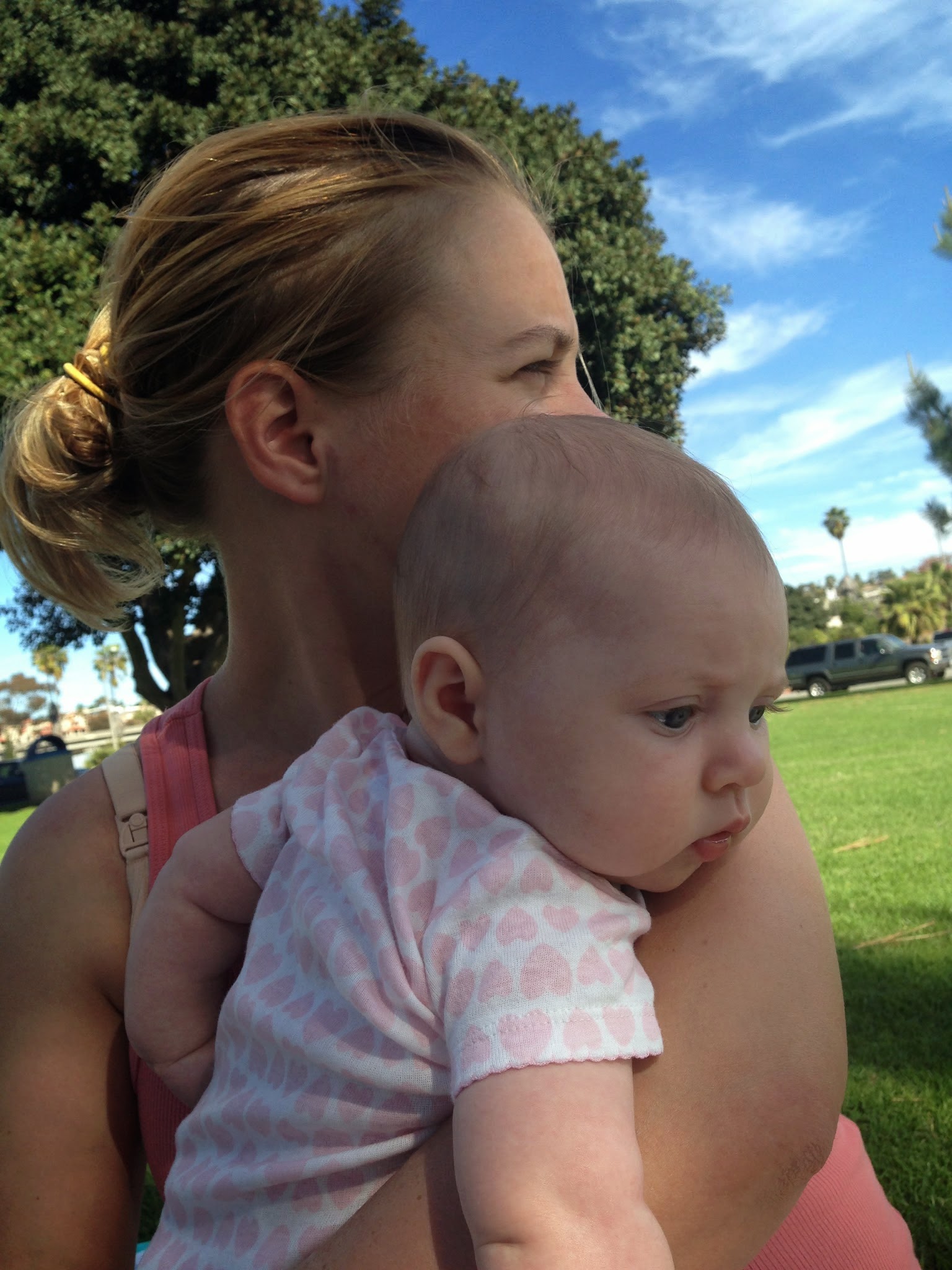 I wondered, towards the end of my pregnancy, if I really had loved running or if it just became a habit of sorts. Would I find that when I was struggling more and not cranking out PRs that I actually didn't love it? It worried me a bit because running had been such a huge part of my day-to-day life pre-baby.

With the c-section, I was sidelined a bit longer than I had anticipated, though I really had an easy recovery from the surgery. Nonetheless, I waited until 5 weeks which was a week earlier than the normal 6 week guideline.

At 5 weeks exactly, we went out with the Bob, Husband and I, to attempt 40 minutes of run-walk intervals.

By the end of the week, I had crawled up to around a 10:30 pace. My lungs felt completely fine. Never felt out of breath in any of the above. Legs? Not as happy. On Day 2, it felt as if my inner thighs hadn't been used in years. Very sore. Weirdly sore. After my rest day, though, all soreness was gone.

After that first week, I started going on in the morning with the Bob on my own, and then in the evenings when the Husband got home from work (my first week of running was his last week of leave), I would run with him. By week 2, I was up to 26 miles with average pace improving to low 10s/high 9s pushing the stroller.

At the end of week 2 I was both impressed and discouraged. If that makes any sense. I was impressed that I could run those paces considering I hadn't run since June of 2013 and also had a baby via c-section just 6 weeks earlier. However, I was discouraged when I compared my paces to what I was running in February of that same year. I'm writing this at 13 weeks out, and I'm still feeling a little discouraged and unsure as to when I'll be running close to my PR times again.

8 weeks postpartum, 3 weeks back to running:

At the end of week 3, I decided I was going to test myself in a 10K. The course was flat, and according to my Garmin, slightly short. I had made a goal of breaking an hour which would be a personal worst, but, hey, less than 2 months earlier I had major surgery, so I was trying to be realistic.

I went out at a cardio effort that felt more like half marathon pace than 10K. I was concerned about my incision - I really didn't know how it would feel. I ended up running 53:32 (which with the course short, probably would have been around 55 minutes) which was not a personal worst! It's still 8 minutes slower than my PR, but, again, I told myself to have some perspective.

I went back to work. At the end of my husband's leave, I ordered a treadmill on Amazon - the ProForm 995c. I was unsure whether I would really use it - I hear that often: the Dust Collector Treadmill.

Turns out it was a good purchase for me. Sometimes, it's hard to leave when I'm not sure when the baby will be hungry, have a poop-splosion, or I just have less time to deal with the Bob (because I don't run with the Bob from my house. I have a massive - no. really. massive hill if I intend to run anywhere from my house and I am not pushing 35-40 pounds of stroller and baby up hills if I don't have to. So I drive 3 minutes to flat running trails).

With the time change, it's now dark in the morning so if I want to squeeze in some miles before 7am, treadmill is my only option unless I want to run with the stroller in the dark. Which I don't, so hamster wheel it is.

I'm about 6 pounds from my prepregnancy weight. I'd like to get down to 110, another 4 pounds, while I'm nursing. Then worry about the last 2-4 pounds when I'm not asking my body to make baby food. But I'm not stressing terribly about the 110 number at this point. 114 ain't bad.

This past weekend I decided to run a half marathon (St Patrick's Half Marathon in El Cajon) with a goal of breaking 2 hours. Around mile 8, I seriously questioned if it would happen. I didn't pick the easiest race - it was pretty hilly. We had a 2 mile long climb from mile 8 to 10. It was also pretty warm - near 80 degrees when I finished. And I had only run 12 miles the weekend prior so the 13.1 was the longest I had run since May 2013.

I managed to pull it out with lots of bargaining with myself as I shuffled up the hill. I wanted to walk badly - my legs were aching! I haven't felt like that in a half marathon in recent memory. Like going back 3-4 years, I can't remember that feeling. It was akin to the end of a marathon. Clearly I need to continue working on my base. I finished 1:56:3x (don't remember exact number). Not a personal worst. I'll take it.

The key thing I've realized over the last 8 weeks, squeezing in two a days, finding time here and there to jump on the treadmill, is that I do, in fact, love running. Even if I'm not running as far and as fast as I used to. It's ok! At least I get to run!