Before I move onto the UK. I know, like two weeks ago but the trip ate up a week and work has continued to be flush with meetings which means I am scrambling to complete actual work.

As I mentioned in a previous post, I had some apprehension around Carlsbad. We had barely managed to squeeze in two long runs and they were backed up to each other 3 and 4 weeks before the race. It could have been worse, but it certainly could have been better. Saturday morning rolls around, I have my coffee start packing for the trip. Husband is still in bed and informs me his head is throbbing, he has the chills – basically he is sick. The flu at that point had been taking people out left and right.

Queue freak out and texting with Nicole who told me to quarantine him (jokingly, of course). I was missing the first day of meetings in the UK for this race, worked hard to squeeze those long runs in, had to sit on a plane for 11 hours (red-eye which sucks), and then needed to contribute in a coherent manner in discussions while jetlagged… to say I was concerned is an understatement.

I started pounding every vitamin, vitamin powder, tea I could find. Zinc lozenges every 3 hours, vitamin C and Echinacea, vitamin B, my daily vitamin, Nuun all-day because it has vitamins – ANY WAY TO GET IN THE FLU-SHOOING VITAMINS.

I didn’t even have wine or beer (!!) at dinner I was that worried I would wake up sick.

Either the vitamins worked and my immune system is badass, or God decided he didn’t want to make my life miserable for a week in a foreign country because I woke up fine other than 4am grogginess. Carlsbad’s marathon starts at 6:15am so even though I live 7 miles from the start, I still have to get up super early.

I met Nicole at the porta-johns which were blissfully un-crowded. I heard that the half marathoners were not so lucky but that’s what happens when something like 10K do the half and only 2K do the full. Running the half in the future will be tough sell for me – the full is so much easier, logistically. And you get extra swag (last year a hat, this year a jacket – both pretty good quality).

We hung out with Pam and her husband who came to spectate (how awesome is she?) and then found our way into the start chute. It was still sprinkling a bit (it had rained in the days before the race) and it was dark but we decided to toss our throwaways there rather than keep them on which was a good call. Pretty much right on time, after another interesting anthem rendition (can they just get someone to sing it normally?) we were off.

The first few miles Nicole and I had to consciously work on keeping an easy pace. We had intended for ~ 8:45 the first few but we ended up clocking 8:37 in mile 1 with a 90 foot climb and then 8:29 with a 108 foot drop. After that we were pretty consistent with 8:40’s in the early miles.  The key to this race, in my opinion, is holding back a bit through mile 9. Reason being pretty obvious: 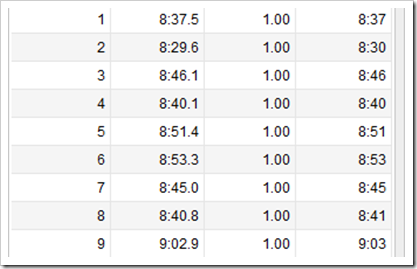 Those first 9 miles went by really fast. It felt like 30 minutes had elapsed when it was well over an hour. That’s the good thing about having a buddy to run with. By the time we got to the half, I was feeling pretty certain we were going to finish together.

I was dutifully eating my blocks every 2 miles (speaking of fuel, they had so many gels at more places than I can remember), Nicole was smiling and thanking volunteers (because she is one of the the nicest/friendliest people I know), and hoarding the free gels (including one for me). Frugal Running Mama is her other name. We had random conversations with ourselves and other people. We spotted other faster bloggers on the opposite side of the road. And we were gradually picking up the pace – I’m not even sure it was planned as much as it was a subconscious agreement.

Around mile 14 the course merges briefly with the half marathoners who are usually running a faster pace – it is easy to get pulled along too fast, unknowingly. Last year I had merged with the 1:45’ers. This year, we merged with the 1:40’s (we spotted the pacer). Before seeing the pacer, I felt like they were going fast and, well, they were running in the 7:30’s, so, yeah.

We made it up the pain in the ass hill at Island Way and shortly thereafter split from the half marathoners. Signage was much better this year than last – last year I think there were quite a few marathoners that turned with the halfers. This year it was totally obvious we had to go straight.

We got some headwind here and I started to wonder if I was going to be able to stick with my running partner. I think we were both having some self doubts because once we made it past the La Costa hill (it’s not a huge hill, but at mile 18, it’s not small), we both commented that miles 16-18 messed with our heads.

At that point, I felt like we were on autopilot. It wasn’t easy, but it just sort of happened. Maybe it was from training together for much of the last few months since Nicole moved to North County, but we just picked up the pace and hammered it out.

Though mile 23, the marathoners were spared the annoyance of weaving through half marathoners. I think that partly why our splits through mile 23 look a little better than mile 24 and 25.

We were cruising – painfully after 20+ miles – but cruising nonetheless. Then we were thrown into the masses.

The unfortunate part of running in the 3:40-4:00 range is when you merge the second time, that is where the bulk of the half marathon finishers are: 2:00-2:20. It’s the most crowded and they are running more than a minute per mile slower. It’s a pain in the ass. This year I knew it was coming so it didn’t affect me as much, mentally. But it didn’t  help the fact that I always run longer than 26.2 at Carlsbad. Tangents thrown out the window.

The final miles were rough and we just gutted it out. Best way I can describe it. 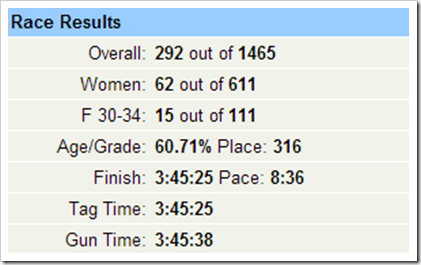 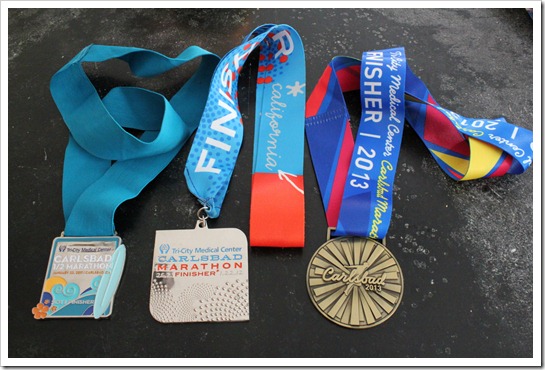 I like the ribbon on the 2013, but the medal itself is pretty boring. I think my favorite was definitely last year’s.

A little useless pat on the back I give myself is that had the BAA not changed then qualification standards, this time would have qualified me for 2014 Boston (35-39 was 3:45:xx, not 3:39:xx). Though I tend to agree that maybe the bar was too low – barely getting in our long runs and the both of us would have BQ’d. So, yeah, I guess I agree with the change, if slightly begrudgingly.

I hung around about 15 minutes with Pam, Nicole, and her super-nice fam, but had to high-tail it home to finish packing for our 6:30 LAX-LHR flight…