Sometime in July, I registered for the Wineglass Marathon in New York. I had been planning to go back East to see my grandparents and while Corning, NY is more than 6 hours from my hometown, it's only about 3.5 hours from my husband's hometown. And I have a real soft spot for roadtripping. Even if it involves some initial flying. I can already see myself being retired with an RV. So long as by the time I'm retired, we've improved fuel efficiency because I cringe at the thought of less than 20 MPG.

Anyway, it's a flat course. 269 feet of climbing (whoop dee do, I do more than that on my usual 4 mile route from my house) and 469 feet if descent. So, 200 feet of loss over 26 miles. Not sure you can find an easier course (well, Ojai 2 Ocean or St. George might be easier, if you're quads are up for some pounding).

Then I worked myself too hard into this shin problem which I have self-diagnosed as some kind of compartment-syndrome type thing. Especially considering when I wore flats last week on an off-running day my shin muscles (both legs) were ridiculously angry. The next day I ran 6 miles and wore heels to work (which I haven't done in months) and my shin muscles were happy/unstressed.

The last 20+ run I did was 26.2 on 8/4. Yeah. We're talking 8 weeks from race day. I took 6 days off at the end of August at the end of a 50K taper which left me with only 5 weeks to race day to attempt to ramp back up as close to 20 miles as I could safely get. I was left with the choice of ramping up too fast (bad idea with a questionable shin), compromising to less then 20, and/or taking a shorter taper. I compromised with 18 miles and a 2 week taper. 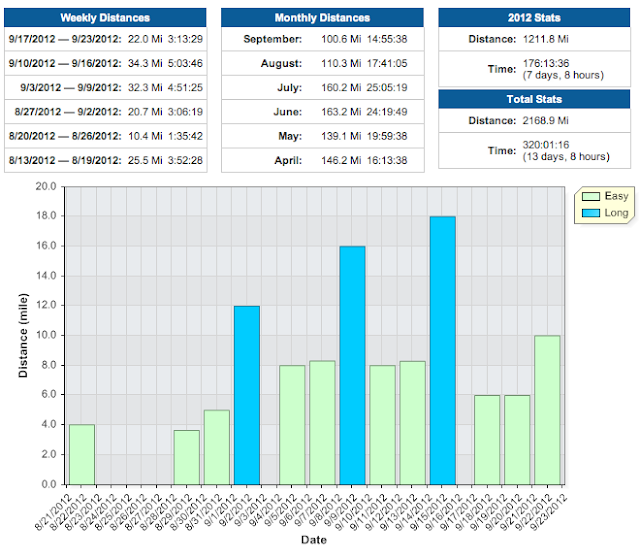 Nice contrast from July to August, right? Sigh. 50 flipping miles. The plan was to be around 160 again but, hey, I had a nice run of it. I did 18 last weekend with Nicole starting before the sun rose at 5:45am, completing it at 9:00 pace (nearly on the dot - a fraction of a second under). And then into taper. 6 miles twice last week and 10 miles this morning @ 8:47 pace. My plan is to do 4-5 on Monday, and then 4 on Wednesday. Then we leave for Pennsylvania (well, we land at Reagan and drive into po-dunk central PA).

I honestly don't know what to expect. I have dropped a pound or two with all the spinning - I think it's actually been harder/tougher in some ways than running. I have only been taking 1-2 days off. But I just don't know if substituting cycle for running 2-3 days a week is enough to allow me to run well. I kind of don't think so, but, really, I have no idea. I haven't run a marathon on such low mileage in a long time (specifically June 2003 at SD RnR and it didn't go well. PW for that one at 4:30:15).

I know I'm going to have fun because even at SD RnR when I was hurting, I still enjoyed it. The marathon experience is really fun for me. It's like it still feels "new" -- like a big accomplishment even though I've done it 6 times before. But the fact that the course is a PR course and I'm not in the shape I'd like to be, just seems like a wasted opportunity. I've done the best I could with the situation, and my leg is feeling pretty good, so, I think I should consider it a successful salvage of what could have been another DNF.