The Next 5 Weeks and Change

Back in September or October the bad influence that is Twitter and following other runners resulted in me registering for Rock n’ Roll New Orleans Marathon because (1) running peer-pressure, and (2) I can’t say no to a ridiculously good deal. Basically, I paid just under $44 to register for the full marathon thanks to the New Orleans Saints demolishing the Indianapolis Colts – $55 off the normal price ($1 for each point they scored over the Colts).

Prior to my piriformis bull sh*t, I really had never gotten injured to the point where it was physically painful to run. So, I thought I was effing invincible! I had decided I would not only run Carlsbad full marathon, but also Palm Springs Half, the Tough Mudder in Temecula, AND RnR NOLA full. Yeaahhh, I managed to pull something out of my ass on Sunday and run better than I expected, but that won’t happen at NOLA again unless I plan out my next 6 weeks very carefully.

And by carefully, I mean this here piece of steno pad paper pinned to my cube wall: 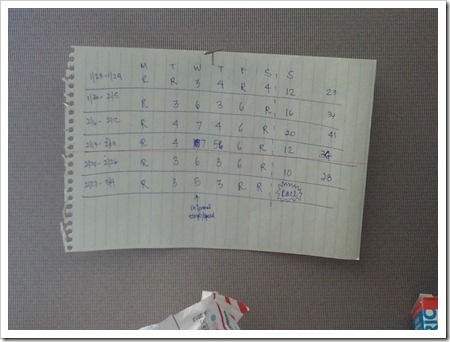 Its looks may be deceiving but it is a well-engineered plan.

Six weeks allows for a full reverse 3-week taper all the way back up to 20 miles. I also decided there will be no half marathon racing business. No. Back away from the registration button (it’s like being an addict or something – it’s a daily thing I have to tell myself). I might allow a 5K, maaaaaybe a 10K, but anything more is dangerous (injury-wise). Nevermind I’ve already committed to that Tough Mudder business though I hope my team will accept that I won’t be killing myself in that race. Not with a marathon less than a week later. If it’s not acceptable, then I just won’t run it.

The other thing to note is the little scribble with the arrow pointing to the Wednesday column: “Informal tempo/speed work”. I am not scheduling tempos or speedwork because I don’t think, for a marathon, they are going to buy me any more than just plain old increasing my mileage. I had a tempo or speedwork every other week (not during back down weeks) for Carlsbad training. So not much speedwork. Result was  a pretty significant improvement to my half marathon race time (4+ minutes), and I exceeded my marathon expectations even had I not missed my final 22 miler. So, if I feel like my hip and legs want to run a little faster, I might throw in some quicker miles in the scheduled easy pace run, or perhaps some 1-2 minute pickups/fartleks. But mileage is what I’ll be focusing on since the next 6 weeks is for RnR NOLA.