My blog reading and writing has been incredibly sub-par as of late. And I 100% blame my job and also my inability to not try to reach stretch goals that are probably a bit too stretch. Anyway, I used to take little mental breaks and read a blog or write a bit of a post during the day but it’s simply not possible anymore. It’s poopy.

Anyway, on Thursday evening, after a full day of work (that was a tad frenetic but that’s just how I am when workloads get heavy), we departed on a 2-week—and-some-change road trip up the Eastern WA wine country via SLC, Boise and then back down through Northern CA. Of course, on the way, I had to squeeze in a race.

The ride to Vegas was uneventful – we arrived at the Golden Nugget which the Husband scored for $50/night. But that’s really all it was worth. It was supposedly renovated, but, we got stuck in a smoking room (which sucked) and the water pressure in the shower was a lackluster trickle. I had wanted to run like 30 minutes at their gym but the day-use pass is $20. Um. No. Thankfully we were out of there by 9am. 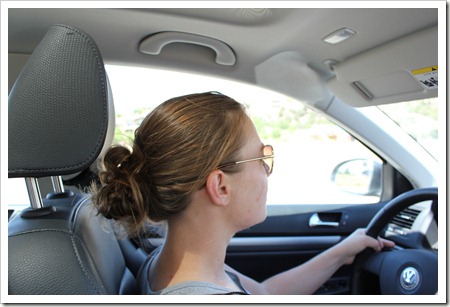 …to pick up my bib and let me just say this. Now, I have heard the phrase: “If you don’t have something nice to say don’t say anything at all,” but in my family it’s more like “If you have something nice to say, find something snarky to say instead.” Maybe I exaggerate. But I will utilize “bread-meat-bread”. The scenery here is beautiful, the people are super nice and friendly, but whoever designed the roads and named them needs to be shot.

We spent 30 minutes trying to find the running store (which, the email they sent had the wrong address) and when we finally found it, it was located near the corner of “East 800 South” and “South 800 East”. Seriously? And this type of numbered street naming is pervasive throughout the entire area. This is not good for out-of-town visitors. At least in New York, you know that street numbers run one way and avenue numbers in the opposite direction. Here you have to somehow figure out the positioning of the sun to understand which way the street numbers will run.

The hotel for last night was a Days Inn which I am much happier with than the Golden Turd. Doesn’t smell, water pressure it good, no drunk Vegas neighbors named Fred keeping us up. It’s also a very short drive to the start of the Hobble Creek Half Marathon. There is much carnage in the room already. 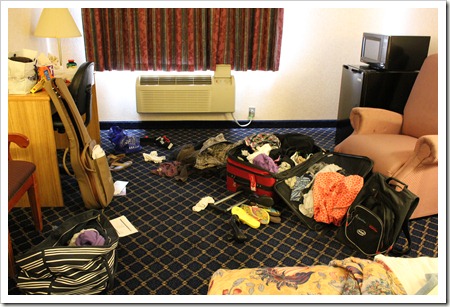 I had high hopes for this race. At least I did a few weeks ago, but then life got in the way – visitors, work, other races, etc. I have struggled to get in 30 miles per week, so I had tempered my expectations. But I didn’t expect was for the elevation to suck the life out of my legs. I also didn’t realize how hot Utah is in August.

The race started 30 minutes late which apparently is normal. Last year it was 45 minutes late so this was an improvement. I rode the bus up the start next to a guy that had run it in 1:17 a while back. I wonder where he finished today. Anyway, the porta potty lines were long but nothing unusual. We took off and the first 6 miles felt OK. I could feel the lack of oxygen, but I was trucking on just under 8:00 miles. Around mile 8 we started hitting hills. Yes, there were rolling hills throughout the last 5 miles. This race is no where near the cheater course that Fontana is. I would say that though there is a net loss of 1200 feet, this race is as hard as any normal half marathon near sea level.

I decided at mile 10 that I was just going to try to enjoy the last 3 miles. It was about 80 degrees at that point. I wasn’t running the pace I wanted, I wasn’t going to finish in the top 100 women for a medal, so why be 100% miserable and enjoy nothing for maybe a minute or two gain in time. I’d rather be 80% miserable and look at the beautiful mountains and chat with some fellow runners.

The other kicker to this race was that you technically were not allowed to wear headphones. The compromise was a bud in one ear if you didn’t expect to place in your age group (otherwise none). The one ear thing would have made me nuts so I went music-less. That part was ok but when I started hurting I would have liked to have some tunes. As I approached the finish I knew I didn’t have much let. I nearly always have a strong kick at the end but I had zippola left. Legs were done. Kaput.

The finisher shirt (which you only got if you finished) is pretty nice: 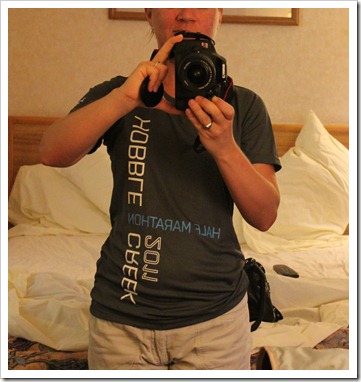 No medal unless you finish in the top 100 of your gender (and the ladies were out in force for this race. Like I’m guessing 60-65% women). But for $45 I can’t complain too much.

All right, we have to get some grub and get on the road to the next stop: Salt Lake City.