Today’s run was dumb. Almost as dumb as the Hamburger Helper Hand.

Wouldn’t it be awesome if the Hand just decided one commercial to just give the bird the family making the meal? “Make your own damn beef sludge!” He’s always so damn happy to be making some awful pre-digested-looking food.

Anyway, so, today I wanted to do 6 miles easy, but the loop I usually do from the office is 5 and I didn’t want to do an out and back, so I devised another loop via Google Maps that went through UCSD. Unfortunately, I failed to add 2.6 and 4.6 to make 7.2 – instead my brain was like “Oh! 2+4 = 6!” That Ivy League engineering degree is working wonders up in this brain.

Besides hitting 18 millions intersections and the aforementioned bad math, the other party to the dumbness is the Civil Engineer who designed the UCSD campus. Apparently, sidewalks weren’t really valued. What kind of major college campus doesn’t have sidewalks on both sides of major thoroughfares? I was flabbergasted. As I was leaving the campus, I twisted my ankle running on grassy slope and swore out loud very near two of those misguided “Shame On [insert company name]” labor sign-holding people (I say misguided because usually the company they have on the banner simply hired the crap-tastic third-party company that actually screwed them over and has nothing to do with the issue).

I ended up running 7.47 miles. 1.5 more than planned. And yesterday I did 6.85. Definitely taking tomorrow off!

Speaking of dumb runs (for me, other people had brilliant performances here), here is a picture of the only part of the Coronado 15K I feel good about: 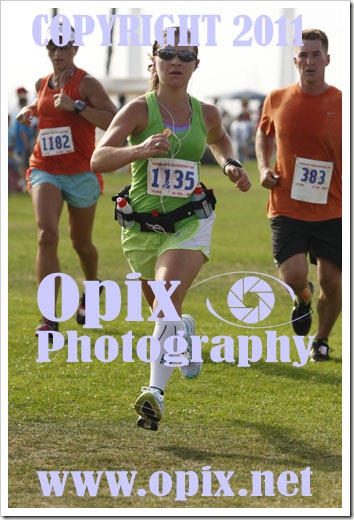 Now, they may have beaten me with the whole chip-time thing but that last .1-.2 miles I was going as fast as my short stubs would take me (5:30 pace). I passed at least 4 people in that last stretch. The rest of the race was a resounding “MEH”. 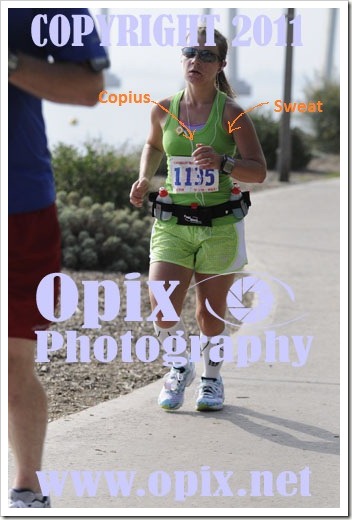 No, not the boobs which I realize I am pointing directly at, but the fact that in a picture taken from 20 feet away in bright sunshine you can see the sweat marks. Seriously, it was the sweatiest race ever. I’ll bet if the photographer took from a few more angles you’d see my swamp ass butt-sweat as well.