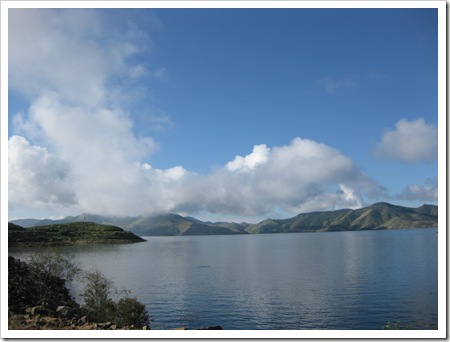 I tried several new things for this race, which I know people say is a no-no, but it’s just a half so it didn’t seem that important. This is always what you say beforehand and then when the outcome is not good you wonder why the freak you tried said new things.

Anyway, so, first, I tried a slightly different lacing on my shoes – I put an additional lace through the little thingy that keeps the tongue in place. This was good – I’ve been having some issues with the Puma Ventis where the tongue would slide over to the outside and I’d get a lovely blister on my right ankle.

I also tried putting fun/funky knee socks over my CEP compression sleeves. This worked well, too, considering it was about 43 degrees as the start. 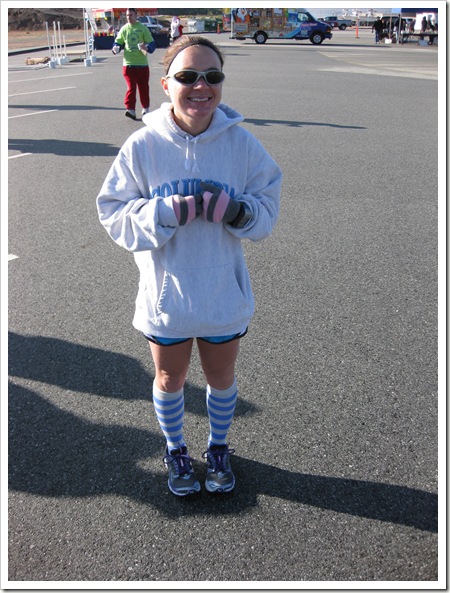 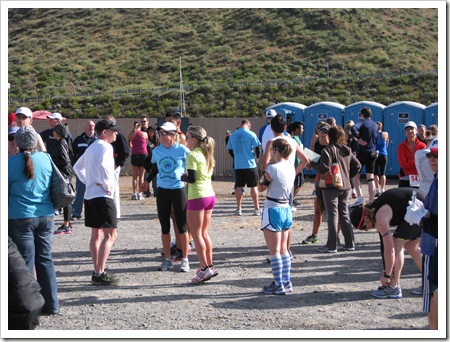 (the chick in lime & pink turned out be the first female)

What didn’t work so well?

I used a different sports bra (didn’t realize I’d never used it in a longer race) and ended up with chaffing along the bottom. I never chafe there, but, well, a $10 Target sports bra will do the trick if you’re into that masochistic business.

The real failure of new stuff tried was my attempt to go it without my fuel belt and rely on water stops. Bad race to try this out. And this is where I being to bitch about the race. Because I am really good at complaining. If you don’t want to hear it, navigate away!

Overall, most of the stuff was good – there was chip timing, the course was quite nice and rolling-hilly, nothing horrible. Very scenic. Everyone was nice/friendly. It started like 10 minutes late, though, as we all stood there shivering waiting for the speeches from 3 different people to complete (where they all basically said the same thing). The bad? There were only four water stops. Really, there were only two that you hit twice since it’s an out-and-back. The website said there would be one every 2.5 miles. That would be five stops and would have made all the difference for me. The first came around at mile 2. This is somewhat early for me to drink, and thinking there would be 4 more, I skipped it. The next one was around mile 4.7. I grabbed a cup, had a block and kept on trucking. I was in the low 8:00 pace at this point.

I got to the turn-around at 6.5-ish expecting a water stop and there was nothing. I realized I might be screwed at this point. There was almost 4 miles in between water stops. For someone used to drinking water every 2-ish miles, this was a problem. By the time mile 8.5 rolled around and I hit the water stop I knew I was toast. I grabbed two cups but the damage was done. That’s where I mentally gave up. My body was cramping – I haven’t gotten a side-stitch in years, but I did in this race. Dehydration much? The last two miles were the slowest two consecutive race miles I have run in more than a year. Like 9:30-ish. I crossed 1:52:03. I was pissed at the end. I was pissed at myself for not bringing my belt, and also pissed at the race directors.

Hemet can get damn hot – like desert hot. Just last weekend it was 90+ degrees out there. This race started at 9am. Can you imagine if we had the previous weekend’s weather on race weekend and they only had 4 stops with a 4 mile break  in between two of them? They would have been carting people off the course (which was narrow dirt roads that would fit one car) from dehydration! They were SO LUCKY that the weather complied. Colossally irresponsible.

Of all the things to screw up, water stops should not be one of them.

The other thing that I was not impressed with was that even the marathoners didn’t get medals. What is that about? I can see forgoing medals for a half-marathon, but a marathon? There should be medals for the marathon finishers. The fees were high enough (I paid $65 for the half on race day. I believe the full was $75) where I think runners expected it. They also never mentioned on the website that you had to pay $5 for parking! I was lucky we had cash. This was not cool either.

This was the 7th running of this race so I was surprised that it wasn’t a little better run. The signage to find the start was terrible (you had to go up and over a hill so you couldn’t see where it was when you first entered the reservoir area). We drove around for like 5 minutes trying to figure out where we were supposed to go. Overall, if I had my fuel belt, I think I would have done better and had a more pleasant experience. But I think I would have rather run the following day in the Run Through Redlands Half Marathon. I think that it was probably better run, cheaper, and had more than 4 ill-placed water stops.

Friday 2pm we start the Ragnar Relay (we are in the last wave as our projected pace is kind of speedy comparative to other teams – 7:57). I hope it isn’t too flippin’ hot as my first leg is around 3:30-4pm in Orange. It’s going to be an interesting weekend!